The following procedures were performed by Prof. Vale at the Mater Hospital and highlight the non-surgical percutaneous techniques available for treatment of a wide range of vascular disease in which symptoms are due to narrowed or blocked arteries or veins. Revascularisation with angioplasty and stenting is the first choice therapy in the majority of patients. Aortic aneurysms and popliteal artery aneurysms can now be treated with percutaneous methods using stent grafts and covered stents.

A 56-year-old farmer with severe disabling calf claudication (pain on walking) after a distance of 100-200 metres, developed an ulcer on the left foot. The patient was a smoker with diabetes, hypertension and elevated lipids. The patient was unable to coontinue with normal work and was at risk of amputation because of the ulcer which had become necrotic (gangrenous). The patient was hospitalised immediately and treated with antibitoics. Angiography was performed (before image) which showed a complete occlusion (blockage) of the left superficial femoral artery just above the knee joint. Blood flow was then restored to the foot (after image) following angioplasty and stenting using a self-expanding Nitinol stent. The patient was dicharged after 2 days and the ulcer healed in 6 weeks. The patient had no claudication and was able to return to work.

Angioplasty and stenting of the femoral artery (in the thigh) is now accepted as the first line of therapy for patients with claudication and indeed critical limb ischaemia. Technical success rate is high (approaching 100%) and restenosis (re-narrowing) rates vary. Stenting confers an advantage over angioplasty alone. Antiplatelet agents are always indicated. Development of new equipment and advanced techniques are allowing operators to open up totally occluded arteries that were previously the realm of vascular surgery. The procedure can be repeated, the procedural risks are low and the hospital stay is infinitely shorter than required for lower limb bypass surgery.

A 67-year-old female patient with a history of right thigh and calf claudication (pain in leg on walking) becoming progressively worse over 6 months. The patient had a history of smoking and diabetes. Pulses were absent in the right leg. Angiographic images before and after angioplasty and stenting of the right external iliac artery (EIA). Symptoms resolved and pulses returned to normal within 48 hours. 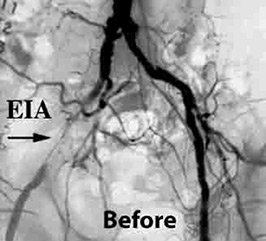 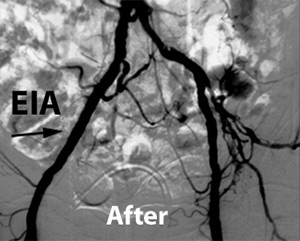 A 75 year old male with severe right leg pain on walking involving the right calf and thigh. The patient has a history of diabetes, hypertension, smoking and elevated cholesterol. The patient also has coronary artery disease (prior coronary stents) and carotid artery disease (prior carotid stent). Angiographic image (before image below) via a right femoral artery (groin) access shows a tight stenosis of right external iliac artery (EIA)(arrow) which would be responsible for the patients symptoms. The patient then underwent angioplasty and stenting of the EIA using a self-expanding stent made of Nitinol (arrow)(after image below). At follow-up in 2 weeks the patient had no more right leg pain with walking. 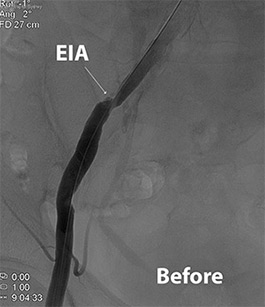 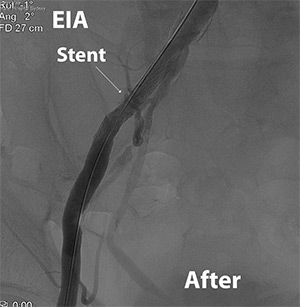 Multiple randomised control trials have demonstrated that angioplasty with stenting is the treatment of choice for arterial disease affecting the iliac artery (and distal aorta). Patency rates are excellent at 5 years and are equal to surgical bypass. Advantages are general anaesthetic is not required (reducing the risk of heart attack and stroke), infection risk is almost non-existent, hospital stay is shorter (2 days compared to 7-10 days) and return to normal mobility and activity is significantly quicker.

A 86 year old male with critical limb ischaemia with rest pain presented with gangrene of the toes of the left foot. There was a long history of diabetes and smoking. Angiogram images of the left leg (before image below) demonstrated complete occlusion of all three infrapopliteal (below the knee) vessels. Following angioplasty of the peroneal artery and tibioperoneal trunk, brisk blood flow was restored to the foot (after image below). The necrotic toe ulcers healed in 3 months and rest pain resolved.

A 78 year old male with right lower limb pain on walking was found to have severe blockages in the below knee arteries as well as a large popliteal aneurysm measuring 3cm in diameter and containing thrombus. Angiography was performed which confirmed severe infrapopliteal arterial disease (before image). The patient underwent successful angioplasty of the infrapopliteal vessels and stenting of the popliteal artery with a covered stent (after image).

An 86-year-old male developed transient left-side weakness involving the limbs as well as slight speech disturbance that lasted 2-3 hours -  a transient ischaemic attack or TIA. The patient had a history of heart failure, chronic lung disease secondary to smoking, diabetes and early Parkinson's disease. The patient was deemed unfit for surgery and at at high risk for a completed stroke because of the TIA. Angiographic images (before image below) showed a critical (>90%) stenosis of the right internal caortid artery (ICA) (supplies the right brain which controls the left body). Following angioplasty and stenting using a distal protection device (clot filter), the right ICA stenosis was relieved (after image below) and the risk of stroke significantly reduced. The patient suffered no neurological events during the procedure and was dishcarged from hospital after 48 hours. 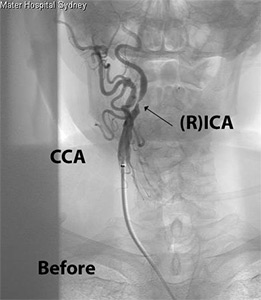 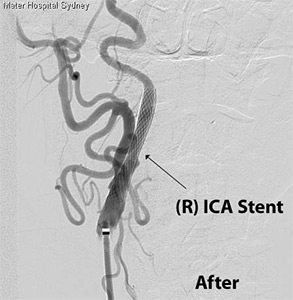 A 72 year old male presented with sudden, but transient loss of vision of the left eye (monocular blindness or amaurosis fugax) lasting 2 hours. Background history included diabetes, hypertension, coronary artery disease and moderate aortic valve disease. Carotid duplex scan showed >80% stenosis of the left internal carotid artery (ICA). Myocardial perfusion scan showed anterior wall reversible ischaemia. The patient went on to have carotid angiography (before image below) showing a tight stenosis of the left ICA followed by angioplasty and stenting of the left ICA using distal protection device (after image below). There were no neurological complications and the patient was dicharged from hospital after 24 hours. In follow-up the patient has had no further episodes of monocular blindness. 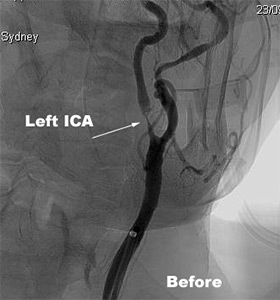 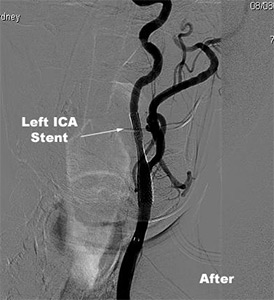 Carotid surgery has been the gold-standard of care for symptomatic carotid stenosis for many years and remains the leading therapy for this disease irrespective of the degree of stenosis. In certian cases, there is a potential high riisk that exists with surgery (mostly in terms of cardiac problems rather than stroke) and in certian numbers of these cases, carotid stenting is performed.

Asymptomatic carotid stenosis poses a controversial problem. Stenoses of 60-80% are best managed conservatively with surveillance and antiplatelet therapy. Stenoses over 80% can be treated in individual siutuations and both surgery and stenting have similar outcomes in terms of stoke rates. Surgery is preferred if the patient is a low operative risk.

A 78-year-old female with uncontrolled hypertension taking four anti-hypertensive agents (including a combination of ACE inhibitor and angiotensin-receptor blocker) developed sudden shortness of breath due to acute pulmonary oedema (fluid on the lungs). Blood tests showed abnormal kidney function. The patient was treated with diuretics. Ultrasound demonstrated the presence of a tight blockage of the right kidney artery. Angiography (before image below) confirmed the critical right renal artery stenosis and the patient underwent immediate angioplasty and stenting of the right renal artery (after image below). After 2 weeks the kidney function had returned to normal and the blood prerssure was easily controlled on 2 antihypertensive medications. 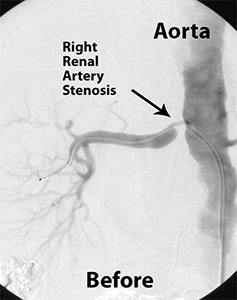 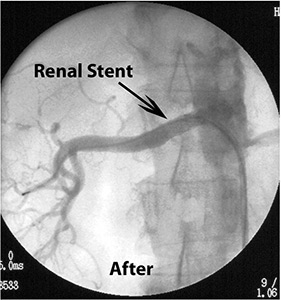 Currently, indications for renal artery revascularisation (angioplasty ± stenting) are: 1) >70% renal artery stenosis and uncontrolled hypertension on multiple anti-hypertensive agents; 2) preservation of renal function - either deteriorating renal function and size, chronic renal impairment not related to other causes, or dialysis dependent chronic renal failure without another cause; and, 3) for control of congestive cardiac failure - either recurrent CCF or flash pulmonary oedema. The two commonest causes of renal artery stenosis are atherosclerosis and fibromuscular dysplasia (FMD), the latter being a common cause in young patients with early onset hypertension and the treatment of choice is angioplasty alone in the setting of uncontrolled hypertension. 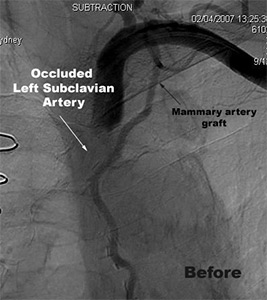 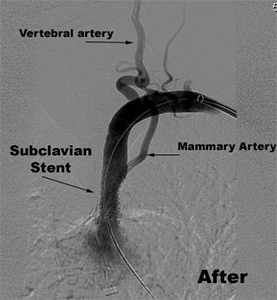 Occlusive atherosclerosis of the upper limb is uncommon compared to other circulations and indeed the lower limbs. Diagnosis is made on clinical and ultrasound  grounds: there will be an absence or reduction in pulses of the affected limb and a difference in blood pressure readings between the two arms; ultrasiund will confirm the narrowing or occlusion. Revascularisation of the upper limb is reserved for patients who are symptomatic - those with symptoms of pain, ache, tiredness in the upper limb with exercise; patients who have had embolisation of clot into the hand or finger on the affected side; patients who have developed chest pain with use of the arm (as illustrated in the above case) and patients who have dizziness with use of the arm (so-called vertebral subclavian steal syndrome). Angioplasty and stenting is the preferred choice. Surgery is rarely used for subclavian artery disease.

The following case highlights the use of percutaneous revascularisation in the setting of extensive lower limb venous thrombosis.

A 45 year old female developed an extensive left leg deep vein thrombosis 7 days following lumbar spine surgery. Acute thrombolysis was contraindicated. Anticoagulation was commenced and after 6 months therapy, there was recanalisation of the left femoral and popliteal DVT but the left iliac vein remained occluded.The patient had venous claudsication and a persistently swollen and painful left leg. An IVC filter was inserted through the right leg vein. Angiographic images were obtained of the inferior vena cava (IVC) and left leg veins showing occlusion of the left iliac vein with extensive collateral vein formation (before image below). The patient then had angioplasty and stenting of the left iliac vein with restoration of venous return to the left leg (after image below). 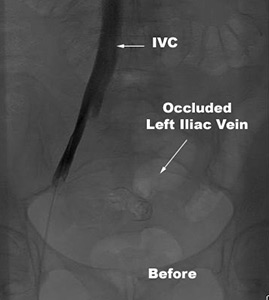 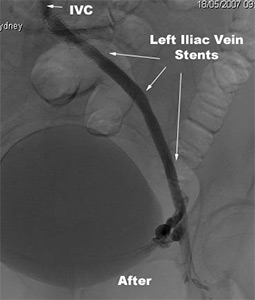 Revascularisation of HD fistulae is usually required following failure of dialysis because of a narrowing or blockage of one side of the fistula - either the arterial side or the venous side. Often re-do surgery is required but in selected cases an angioplasty with or without stenting can be performed as outlined in the images below. The before image shows a tight narrowing in the basilic vein which led to the patient being unable to dialyse due to high venous pressures. Angioplasty alone was performed (after image) resulting is good correction of the stenosis and resumption of normal dialysis later that day. 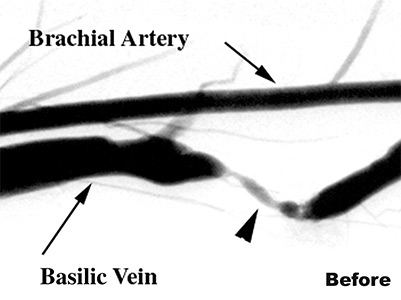 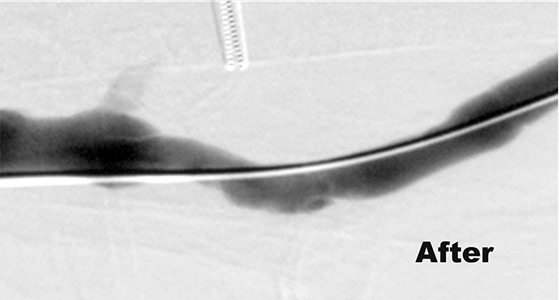 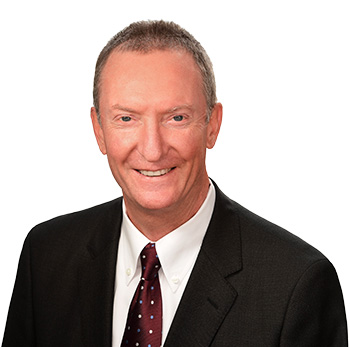